A Romance Formed at Precisely the Right Location 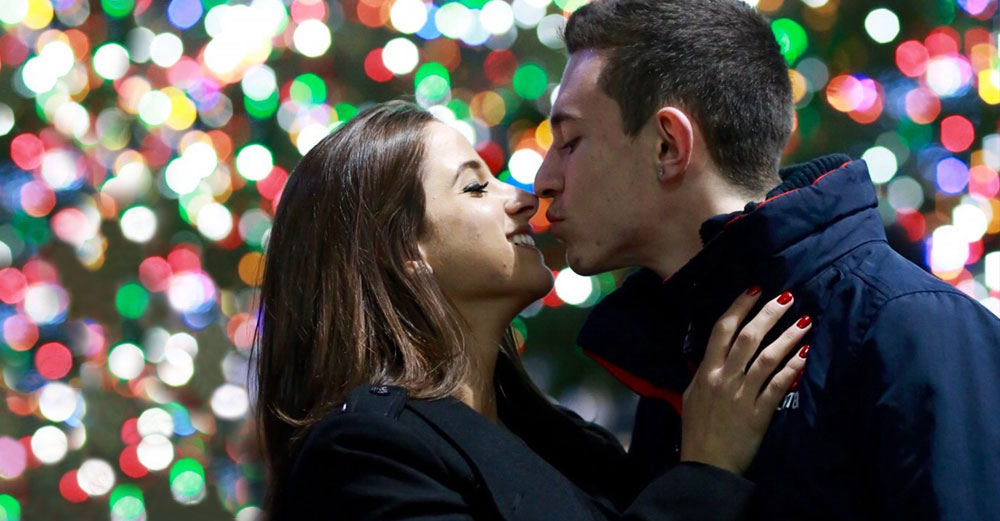 What’s love got to do with latitude and longitude?  Everything if you’re Dana Ragolia and Raz Nicu.

The story of these two business administration sophomores at Farmingdale State College began innocently enough, in, of all places, a freshman English class. It was the second meeting of the class, and Raz walked in late. It did not sit well with the professor, Dr. Laurie Rozakis, who scolded him when he walked in the door.

Raz had an excuse, one that we’ve all used at one time or another: he couldn’t find a parking space. He was a little miffed at Dr. Rozakis’s reaction, and as he looked for a seat whispered to no one in particular “Next time I’ll fly here!” What happened next literally changed his life.

“As I said that, this beautiful girl in the last row laughed, and at that moment I knew where my seat was going to be.”

The beautiful girl who laughed was Dana, who was immediately struck by Raz’s sarcasm.

“When I laughed at his remark we looked at each other and there was an instant connection, as if we both thought ‘We have the same sense of humor, and I want to know more about you.’ ”

Dana sure wanted to know more, and at the end of class she made her move, asking Raz for his telephone number.

“I used the excuse ‘I think we should exchange numbers because the professor told us to get other students’ numbers for class purposes.’ Yeah, I just wanted his number.”

Raz was, to put it mildly, stunned.

“We talked throughout the class and at the end she actually asked for my number first. I was trying to play it cool and ask her later but she beat me to it.”

Sometimes you can play it too cool, but in Raz’s case it wasn’t the end; in fact, it was just the beginning.

Dana recalls: “The next day he texted me and we never stopped. We talked about everything and anything and got to know everything about each other. We stayed up till the latest hours on the phone.”

One of the first things they learned about each other was that they were both business administration majors: Raz because he thought it would give him more options in pursuing a career in sports management, and Dana because “You can do anything with a business degree.” And it didn’t hurt that both her father and brother are Farmingdale alums who also majored in the subject.

Dana is making the most of her time at Farmingdale, where her major GPA hovers near 4.0. She has earned spots on the President’s and Dean’s lists, and owns an academic excellence award. She’s also president of the Phi Theta Kappa honor society. Not surprisingly, she was a straight “A” student in high school who is exercising that same work ethic in college, with similar results.

“I’ll always try to achieve as much as I can,” Dana says. “I’m a perfectionist.”

Raz, on the other hand, is on a slightly different academic path.

“I’m as average as can be. I come from a good high school, which was pretty much college for me.  So when I got to Farmingdale, I had little ambition to study all day.”

Still, lots of students would be thrilled to have his 3.3 GPA.

Raz and Dana wound up in the same English class as part of their degree requirements. Now, as a tradition, they take all their English classes together. In retrospect, it seems like a logical outcome given the connection they had that magical day in Dr. Rozakis’s class.

But hold on… How did we get from talking in class to texting back and forth to creating a tradition? Let’s back up.

The growth of a fairytale romance

Though it might seem that Dana and Raz went directly from laughing together in class to walking hand-in-hand to class, it wasn’t quite like that – much to Raz’s chagrin. As Dana explains it, “A few days into us texting he asked me to go to a carnival with him, but I said no because I didn’t know him that well yet. He had to play the friend card for a while. I asked him for his number first because I wanted to get to know him and he was funny and caught my attention, but I wasn’t ready for anything right away. So the first few times we hung out was with friends.”

At that point it wasn’t going quite the way Raz had envisioned it, given that Dana had asked for his telephone number. But he saw something in Dana he liked, and so was not easily deterred.

“She politely blew me off, but I kept trying. I asked her to Adventureland (an amusement park near the college) the night Farmingdale students were going; I asked her to lunch after class, but she made me wait until she was ready. But a girl like this doesn’t come along too often, so I waited until she was perfectly ready.”

That was four months later, when Dana was wholeheartedly convinced that she and Raz were on the same page. Like most first dates, they went out to eat – only Dana was so nervous she remembers barely eating a thing. But the die was cast and their future together had begun to unfold – not only to their delight but to the delight of others.

“Everyone in class knew about us,” Dana says. “We’d save seats for each other, hold hands under the table and get in trouble for talking in class. When we finally started dating and I posted a picture on Instagram, it was like our whole English class commented ‘FINALLY!’”

Fast forward one year, and the story has turned out much like you might have anticipated – only better.  Dana – who might best be described as a thoughtful romantic – sees her relationship with Raz as both a movie and a fairytale.

“We feel we did everything the right way, by getting to know everything about each other as friends first before dating. He’s my Prince Charming! It really is like a movie. We met in school, we became best friends, we started having feelings for each other, we started going out,  and we’ve been happy ever since. We’ve gone to Disney World, where he bought me a crown and made me feel like a princess. That made it feel like a fairytale even more.

“I just feel like I’ve always known what I wanted and had a very high expectation of love, watching my parents be in love, my brother and his wife, watching the bachelor and bachelorette, and I would say Raz has exceeded all my expectations of love.”

Now, getting back to the latitude and longitude thing.  The question is, what does love have to do with 40.7525 N, 73.4287 W.?  Everything, because they are the coordinates of Farmingdale State College – the place where Raz and Dana met – and the coordinates etched into the necklace Raz gave Dana on their first dating anniversary. Dana also wears a promise ring, which she will trade in for an engagement ring once she and Raz have graduated in 2019.

Oh, and what about Dr. Rozakis, who helped jump-start this relationship?

“I always see her on campus and every time we see each other she never fails to mention how she loves looking at my Facebook page and seeing me so happy,” Dana says. “When I posted a picture of the necklace I wrote on the bottom of my post ‘Thanks to Rozakis’s class.’” 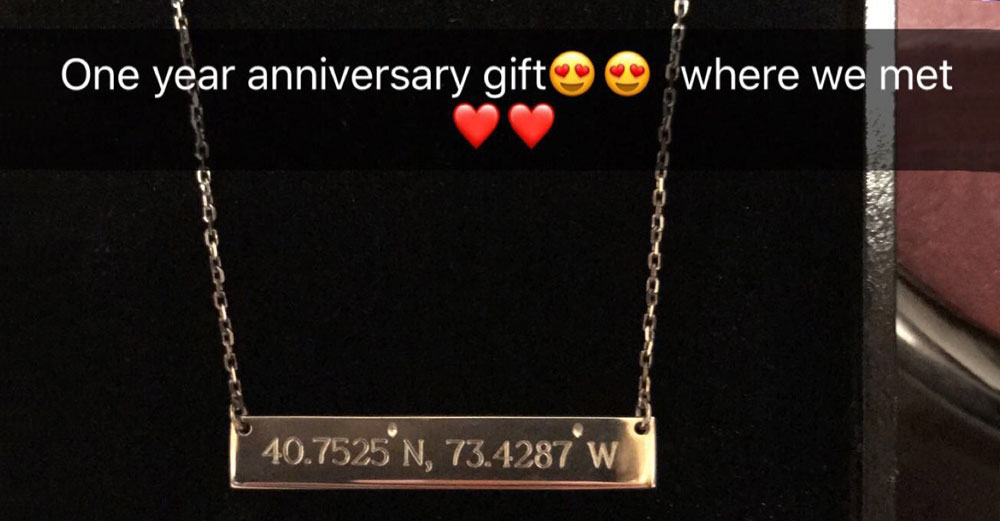