The Matrik Blogger > Wellness & Success > From Challenges to College Success, A Student Works To Pay It Forward

From Challenges to College Success, A Student Works To Pay It Forward 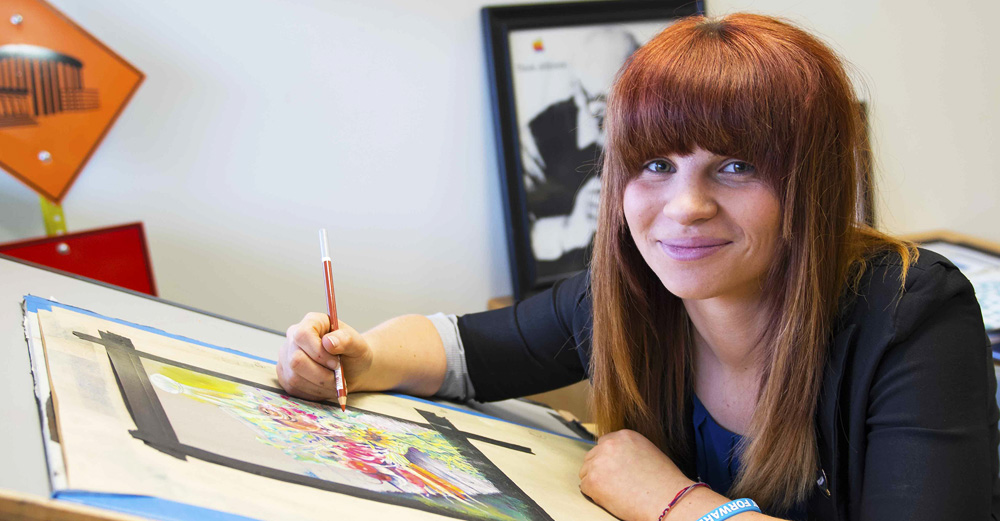 This is a story of grit, nerve and fearlessness.

It is the story of Deirdra Kearns ’17, a Farmingdale State College visual communications major who, when you examine her grossly dysfunctional life, has no business being a successful student, employed graphic designer, and budding philanthropist.

“Pay It Forward” is her life-theme, as she evolves into a woman who wants to give back after a life in which she was deprived of everything a child/teen needs to become a responsible, self-sufficient adult. She even dares to dream about changing the world with her work. Ambitious, yes; impossible, no! Not for this “Comeback Kid.”

“It took blind stubbornness, luck and the willpower to not always accept bad situations and outcomes that were handed to me,” Deirdra says, with, amazingly, a smile on her face. “Sometimes there just has to be a time to say ‘enough is enough’.  You can have a second chance.

“People have to accept that life is a process and there are going to be many moments for young people to say, ‘I do not want to feel this way,’ or ‘I am sick of fighting this hard’. You can gain a lot of experience from failing. I learned how to ask for help, and I changed my perspective a few times to get through it all.”

The intestinal fortitude it took to “get through it all” cannot be underestimated. Deirdra was raised by a grandmother who suffered from clinical depression and was ill equipped to raise a pre-teen. Her mother struggled with mental health and substance abuse problems. She had an absentee father, and her grandfather, who was her real father figure, died of cancer. Deirdra grew up in an unhealthy environment – to the max.

“I was raised with manners and a few life lessons, but always felt like someone’s burden and that there was something wrong with me. I faced a lot of difficulties and challenges that a young person should not have to face alone. I had to grow up quickly because I was surrounded by adults that did not know how to be the strongest role models or give strong guidance to a young person.

Get involved to help Pay it Forward 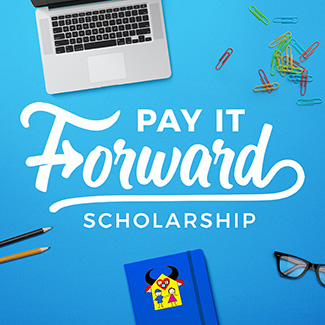 “Growing up I was always told that there was something wrong with me. That life was going to be a difficult road. I was told that school was always going to be difficult, that making friends was going to be hard. Expressing myself, learning from experiences, and figuring out that the world was not always so black and white was a process I was not exposed to. I was exposed to many hardships early and I thought that was how life was supposed to be – a struggle.

“I was never put in a position where I could seek and learn what my own happiness was. Also, that there could possibly be a better future for myself. I do not blame others how I was raised, but no one suggested to me that you could ask for help. I was not in the position to ever see potential in myself. I thought life was supposed to be emotionally and mentally difficult. I became a statistic with ADHD that would most likely not succeed.”

Getting through the tough times

It was as bad as it sounds, but though Deirdra is pulling herself away from her past she is not whitewashing it either. She describes herself as an at-risk high school student with emotional problems (“disruptive and negative behaviors”), a home life that drove her to sleep on park benches and couches at friends’ houses, and academic issues that flagged her as unlikely to graduate. But she battled back and got through those difficult times.

“I put myself in a position to be in the same room with people who seemed like they were happy and could possibly help me seek a better future for myself. I had no other choice but to move forward. Then, someone taught me how to ask for help. Someone suggested a different perspective on things. Someone showed me what it was like to feel motivated and see potential in myself. There were a lot of people helping me because they saw a need instead of just walking away from a ‘problematic child’ and it worked out very well. I started listening in class and to the teachers that pushed me to get better grades. I started showing up to school, started enjoying going to classes and a making a better future for myself.” 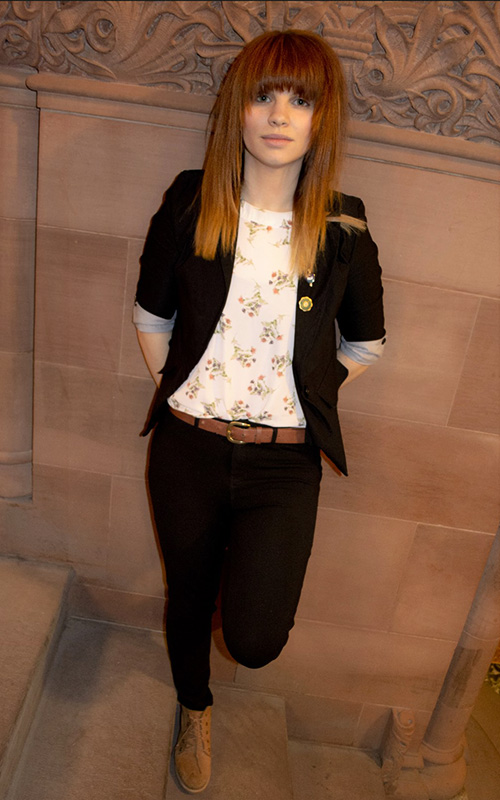 It was during this time that Deirdra met a woman in her hometown of Smithtown, Long Island, who took an interest in her. Before long, the woman helped engineer a $500 “courage” scholarship, driving lessons, and a car for Deirdra through a local foundation. Deirdra had rarely experienced such love.

“I asked how I could pay back her kindness of my $500 award. She challenged me with her response of, ‘Sweetie, all you have to do is pay it forward.’ Since then, I am trying to pay back the kindness and fulfill the wishes of the Smithtown Children’s Foundation, Farmingdale State College and the Long Island community that have helped me throughout the years of high school and college. My scholarship/award, which was a simple piece of paper and a check, gave me such heart, confidence and motivation to keep challenging myself though hardship.”

The $500 inspired Deirdra so much that she has created a Pay It Forward Scholarship fund of her own, for struggling students in the two high schools in her hometown. But she won’t just hand out money to students in need; the criteria are tough: 2.75 minimum GPA; a list of schools applied to at the next level; two letters of recommendation; and an essay. Deirdra’s goal is to have raised the $1,000 by the end of this semester. She is accepting donations from those who contact her at [email protected].

Pay It Forward actually began as a “mock” scholarship as part of a senior art project, but it quickly evolved into something more.

“I thought if I was going to put so much effort and time into a campaign I might as well make it real and something that the community can benefit from,” Deirdra explains. “I believed if I could find one student to pass the beacon on to, a scholarship would be the right way of showing support and encouragement.”

Deirdra didn’t enroll at Farmingdale as a visual communications major. She was working as a dental assistant at the time, and it seemed natural to join the dental hygiene program. But Deirdra was a graphic designer to her core, and it was only a matter of time until she needed to find full expression for passion. That was obvious to Monique Ramos, her EOP counselor, who noted that during the EOP summer program before her first semester, Deirdra’s team made a presentation that highlighted her photography and artistic skills.

Deirdra notes that if not for EOP she wouldn’t be a Farmingdale student today. She tells the story of visiting colleges with her high school mentor, all the while thinking she’d missed their fall enrollment deadlines. It was more a trial run, and Farmingdale State College was part of the tour.

“For some reason I walked into the EOP office asking to speak to someone that could put me in the right direction of where I should start to apply. I probably spent over an hour speaking to Mrs. Ramos about colleges, and the dental hygiene program and a bit about graphic design. She told me that EOP could help me pay for college, and that there are scholarships, grants and financial aid options for people like me. She also said something along the lines that there was someone who could not attend the EOP summer program, so there was an open spot on their list. They could put me on the waiting list, and if my paperwork worked out I could be accepted into the program and be accepted into Farmingdale as a dorm student.”

Serendipity had its day and Deirdra was in. Ramos held her hand – “She was a shy, reserved student eager to attend college and do her personal best” – and soon she was integrated into the program.

“EOP opened doors that aligned with my future. EOP was willing to invest time and financial support into my life and education. As you take on college work and participate in college life, you’ll encounter new ideas and challenges. Along the way you’ll need ‘stand-in family’ – friends and other people to help you along the way. EOP helped me prepare for a future here at Farmingdale, which better equipped me with lessons to give back.”

Giving back includes using her design skills to help others, as her Paint It Forward website and print materials illustrate. It could be said that Deirdra hasn’t learned how to be artistic at Farmingdale; rather, her education has helped draw out and channel her innate talent, which began expressing itself all the way back at middle school, where she was always taking photos of friends and drawing logos in her notebook.

“My college studies opened my eyes to the possibilities of pursuing a solid career in graphic design. I never thought that art, something I considered so much fun and an escape, could actually be something I would later excel at. I naturally gravitated to design and art because it did not seem like work. It was something that made me truly happy.”

That joy has expressed itself in many ways: as a member of the Design Club; a graphic design student assistant; and helping set up shows at the campus art gallery. She is also treasurer of the Farmingdale chapter of Chi Alpha Epsilon, the honor society for EOP students.  Volunteering is also on her schedule, donating time and talent to the American Diabetes Association and the foundation that awarded her the car and $500 scholarship.

Now Deirdra is ready to leap into the next phase of her life. Her short-term plan is to continue with the design firm she works at; long term it’s to move to Canada to be with her boyfriend. All in all, she’s ready to change the world with her design – one country at a time.