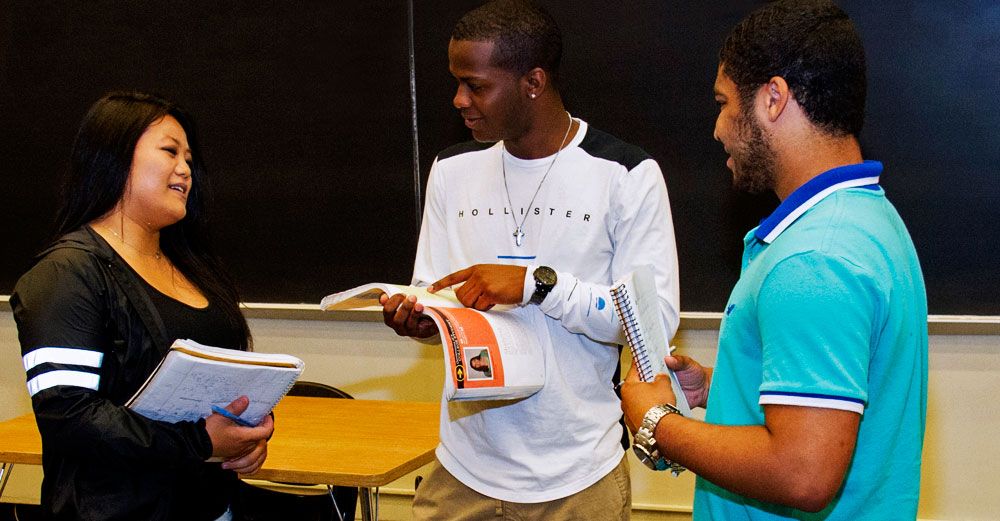 How often do 18-year-olds in foster care get the chance to go to college?

Not very often. Some drop out in high school. Others run away. They may end up homeless. But if they look for it, there are opportunities waiting for them. The Educational Opportunity Program (EOP) is one of the ways that these students can get help to overcome the odds and achieve success.

At the University at Albany, new EOP freshman Adriana Ng knows the odds; she is determined to beat them.

Ng lived most recently in a foster care home on Long Island, as it was not safe at her adoptive home. She was born in China and grew up in an orphanage there.

“I am glad I had the opportunity to be accepted to EOP,” she said. “Kids like me in foster care – I wouldn’t have gotten into the University without it.”

Ng is one of 245 incoming EOP freshmen who came to campus for a five-week intensive orientation program. It’s a boot camp for academic life, with classes in time management, career counseling and making the transition to university life. During these five weeks, students are required to study two hours a night, all to help bring them closer to the goal that they set out to accomplish.

“I want to inspire other foster care youth to be successful,” said Ng. “I want them to know it doesn’t matter where you come from, what matters is how you choose to live the rest of your life.”

Ng is confident that with hard work and perseverance, she will earn a bachelor’s degree in business administration, and go on to get an MBA. And she would be one of many to do so. For the SUNY system, the six-year graduation rate for students in EOP is 67.7 percent, compared to 65.7 percent for all students.

Another new EOP freshman, Keyshaun Scales of Schenectady, N.Y., wants to be a lawyer and is interested in the 3+3 program with Albany Law School.

Being searched on the hood of a police car and then detained – when he was 7 – left an indelible imprint of problems in how the criminal justice system treats African Americans. “I am working for a future so I can work for those who cannot protect themselves against injustice,” he said.

Scales grew up in a neighborhood where going to jail or dropping out of school were not uncommon, but he knew he was different. He instinctively chose a path that would lead to college. He was regularly on the honor roll in high school, and was honored with the student of the quarter title.

His English teacher at Schenectady High School told him about UAlbany’s EOP, and suggested it would help him hone the skills needed to be successful in college. She told him that UAlbany is a great school for the majors he is looking at – psychology or philosophy.

Outside of school, Scales is part of the management team at Blaze Pizza in Niskayuna, a job which he credits with building his maturity and character. While he is 18, he has been told he looks older. He speaks highly of EOP, noting, “If EOP was a living thing, the students would be the heart of it, but Maritza and her amazing staff of counselors, instructors, alumni and student assistants are our fuel.”

“EOP has prepared me for college more than I ever would have expected. If it was not for EOP, I would not be in the place I am right now.”

Just a few years ago, Moises Urena, a new EOP student from the Bronx, wasn’t sure he wanted to go to college. In his neighborhood, the talk was about getting money to live lavishly, not studying hard.

Coming from a place where everyone doubts you does not inspire you to dream about college, he said.

But then, on the fourth of July weekend in the summer before his junior year in high school, his family was evicted from their home. They were temporarily split up: He stayed with a friend; his mother stayed with his grandmother.

That was the turning point for him. He had a talk with his older brother, who was already studying at UAlbany in EOP.

“You know what? I decided I wanted to go to college. EOP gave me hope that things were going to be better,” said Urena, who plans to major in political science. “I would never have had the chance to come to EOP if the eviction hadn’t happened.”

Like Ng and Scales, Urena has made a decision for his future.

“I’m going to be as good as I can be to give back and not let other people go through what I went through,” he said. His mom, who is his “No. 1 role model and an amazing person,” worked very hard and eventually got their home back. Today she is working full time and going to college full time.

It’s through the EOP Program that Moises has been able to prep his way to success. “EOP has prepared me for college more than I ever would have expected. They taught me about time management, networking and study habits. The emotional support and the workshops and programs that they have are so valuable. The emotional because they care for the students as if they are family and the workshops because they teach life lessons like meal predict, how to network, how to tie a tie, and even workshops to make Valentines Day cards to send back home to love ones. If it was not for EOP, I would not be in the place I am right now.”

And when this undergraduate journey is over, what’s next? Urena wants to go to graduate school, too.

“I want to be president of the United States,” he said. “My No. 1 goal is to make a difference.”

The commitment that students like Moises, and all of those in EOP, carry with them is sure to make a difference for many others in the future.

Written by University at Albany

Located in New York’s capital city, the University at Albany offers its more than 17,000 students the expansive opportunities of a major research university and an environment designed to foster success.